How would you go about finding what process was making SMB requests on a Windows PC? If you’re like me you probably answered either netstat or PowerShell’s Get-NetTCPConnection. These are the commands I reach for whenever I needed to link a process to a network connection, but the case isn’t so simple for SMB.

The problem with this approach is that all SMB client traffic goes through the System process (PID 4), running under the SYSTEM user account. This can be an issue when, for instance, we’re investigating firewall logs which are telling us that a local PC is trying to make Internet bound SMB requests. Is it malware or a misconfiguration? The first step is working out what is making those connections, and this is where the aforementioned behaviour becomes a hinderance.

Let’s see how this looks in PowerShell. I have an open SMB connection to a local resource via a PowerShell process, what does Get-NetTCPConnection and netstat tell us?

What is PID 4 on Windows? It is the System process, and it makes the SMB network client calls on behalf of all other processes.

We can further verify this behavior by looking at TCP/IP connections for the System process in Process Explorer.

One of my first thoughts was to leverage Sysmon with network connection logging, but this too only shows the System process, not the underlying process that requested the SMB connection. 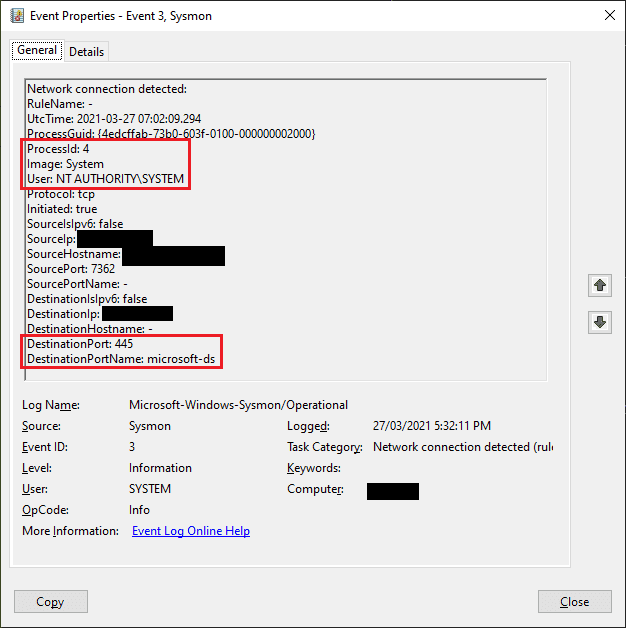 As unfiltered Process Monitor output can be overwhelming, we’ll want to begin by configuring filters to only display events we’re interested in. Primarily we want to capture events with an operation of IRP_MJ_CREATE, but to clean things up a bit more we also want to only include events beginning with \\ or C:\Windows\CSC\v2.0.6\namespace\. 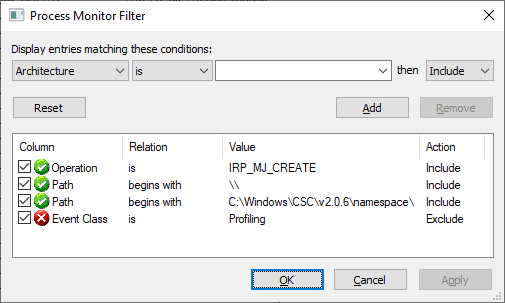 The presence of an event containing the last mentioned path indicate the SMB connection was successfully established (though I would still use the Get-NetTCPConnection or netstat commands for verification), while an IRP_MJ_CREATE operation that only lists the \\host path indicates a connection was attempted, but not successfully established (i.e., blocked by a firewall, or the remote host not running an SMB service).

This means we can get insight into processes that are making SMB connections which may be blocked by firewalls further up in the network architecture, but we where still want to identify what is initiating the connection attempt in order to determine whether it is malicious or not.

Here are a few screenshots to demonstrate what SMB connections will look like in ProcMon. Firstly, a successful attempt from a PowerShell process. 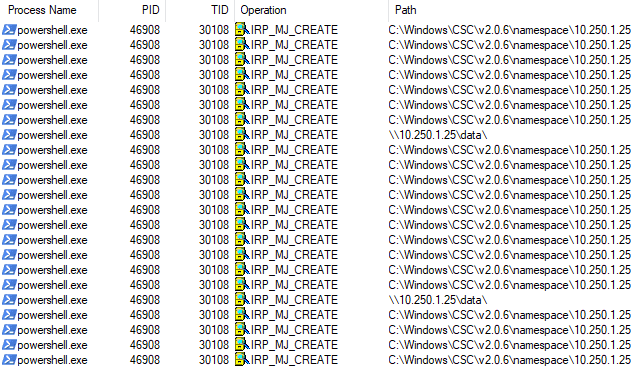 And a failed connection, notice the lack of entries containing the C:\Windows\CSC\v2.0.6\namespace\ path.

This operation is logged after the connection attempt fails, not on the initial request.

And a final verification, we can see the same request being made with Get-NetTCPConnection, but listed under the System process.

That’s all for now, hope this has saved you some time!